This post contains all the video footage of Bucket Full

Bucket Full was originally sold under the name Bucket Filler.  The author of the book kindly asked me to change the name to Bucket Full.

This is the ad copy.
Are you a bucket filler? A collapsed bucket is opened up and shown empty. From the empty bucket 18 smiling stars appear! The Bucket Full effect is perfect for school and library shows, as well as a motivation presentation for adults. The Bucket Full magic effect is exclusive to Barry Mitchell Products.

Bucket Full includes silicone collapsible bucket, book, 18 smiling super soft sponge stars, display pan, mini bucket, DVD/PDF Book, and specially designed gimmick that does the work.
The usefulness of this new gimmick is truly unlimited. It can hold 18 sponge stars or 16 two-inch balls or 24 one and a half inch balls or 14 diamond cut silks or 45 feet of two-inch rainbow streamer or 15 feet of four-inch streamer plus more. DVD includes PDF book and sample presentations with stars, silks, sponge and a variety of other objects. The DVD itself is a wealth of content, with scripts and ideas on how to use many of your existing props with the Bucket Full effect.

The magical Bucket Full effect is inspired by the book “Have You Filled a Bucket Today?” by Carol McCloud. The Bucket Fillers name and logo are trademarked to Bucket Fillers Inc. We are not affiliated, associated, authorized, endorsed by, or in any way officially connected with Bucket Fillers, Inc. any of its subsidiaries or its affiliates. All content provided is for entertainment purposes only.

Reach for the Stars Demo

Reach for the Stars Explanation

This is a portion of Mago Takandri’s performance of Bucket Full at KAX 2018. I added it to this post because I want members to see the creative way he used the prop. He uses several of my props in creative ways.

Red Nose Rag
By Barry Mitchell
Here’s a great additional story for our Bucket Filler product. I purchased the “Twelfth Street Rag” on Itunes to use as background music. Load the gimmick with sixteen red super soft two-inch balls. Inside the bucket place a two-inch red clown nose, green ball, and yellow ball.

Presentation & Handling
There are some symbols in life that are immediately recognizable. (Pour the three sponge balls from bucket into the cake pan. This action proves the bucket is empty.) In less than a second we know what the colors of a traffic light mean. (Show red, green, and yellow sponge balls) Green means go. Red means stop. And yellow means hurry up.

One of the duties of a circus band is to give alarms in the event of an accident. When the alarm was sound it was time to send in the clowns. (Produce ball 1 from the gimmick. Just before each ball is produced take a slight pause, snap your fingers, and pull out the ball. Follow the same formula with each ball production beginning with a finger snap. This is a personal preference but, if performed well, it should add a dramatic feel to the presentation.)

The clowns were there to distract the audience away from the accident. (Ball 12) I’m glad that in our world of disappointments (Ball 13) there are still those (Ball 14) willing to say, (Ball 15) “Send me.” (Ball 16)

Will you be a clown? We can all be someone’s clown. 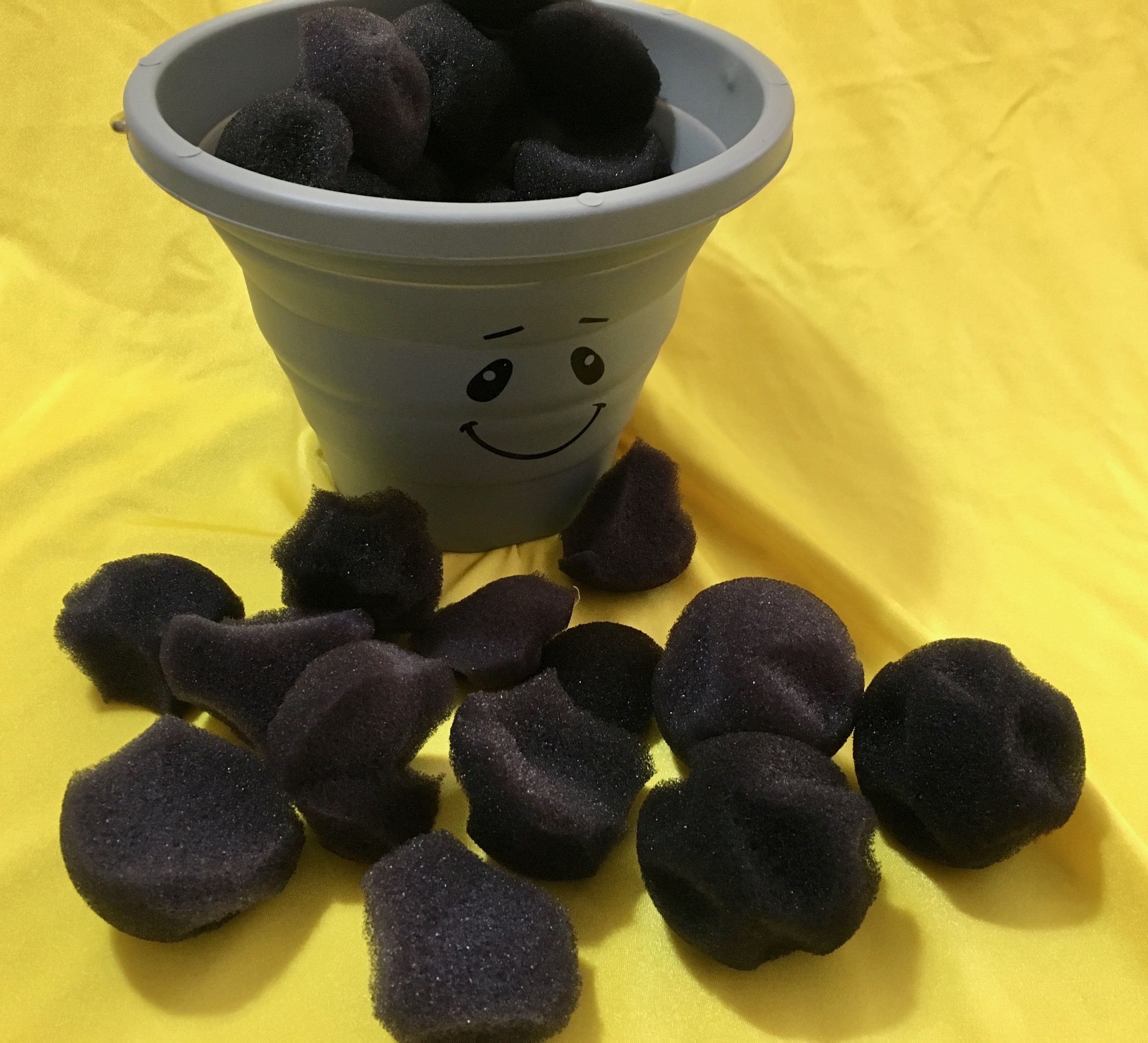 A New Story for Bucket Full

The Coal Bucket and Lumps of Blessing
By Barry Mitchell
I got a lump of coal in my stocking and I’m thankful. I’m old enough to remember a coal bucket near the fireplace. It had a unique shape, but any bucket could hold coal, even one like this.

Most people today have no idea what coal is other than a black rock. We hear about coal miners and coal as fuel, but most people have never seen a piece of coal.

Allow me to give you a very simple definition. It’s a rock that burns slowly. If you’re burning it in a fireplace, it lasts longer than wood and is a good source of heat.

There are many harmful effects of burning coal, however, during the industrial revolution, it was a great source of fuel to heat a home. You’re probably wondering why I would tell you so much about coal at Christmas. It’s because Santa has a reputation for leaving coal in the stockings of naughty boys and girls.

According to legend, families in the 1700’s would hang laundry near the fireplace to dry. When Santa visited a home, he would put candy in the stockings of good boys and girls. For the naughty, he would reach into the coal bucket and get a lump of coal. I can’t imagine how heartbreaking it would be to wake up on Christmas morning to discover coal in your stocking.

Today parents around the world still tell children to be good so they won’t get coal. That’s the legend. But I think the truth of coal might be a little different. What if a stocking full of coal was a good thing? Santa brings joy to children around the world every Christmas. Surely, he wouldn’t leave coal unless there was a good reason.

I think Santa gave coal to very special children with a great need. Imagine if your family was so poor that you could only afford a small supply of coal. What if more coal would mean more heat? Maybe a warm winter night was more valuable than a few pieces of candy.

I believe Santa’s gift of coal might have been a valuable treasure for a cold home. Those lumps of coal were rocks of blessing. I’ll never see coal the same way again. You may see a bucket with a single lump of sadness but I see an overflowing blessing of coal.