This explanation taken from the book “Let Me Tell You A Story,” by Barry Mitchell
Dead Eye Duck
I wish I could remember what inspired me to write this story, but I’ve got nothing.  In many cases, I write just because I have time.  I wrote this in the car on the way to a convention.  Yes, I write most of my material while driving.  It’s no more dangerous than eating, talking on the phone, or putting on make-up.  However, I do turn more heads when I put on make-up.

Originally, I had duck artwork drawn to help tell the story visually.  I created a laminated picture book, which is spiral-bound at the bottom.  As I tell the story, the pictures are flipped forward and down.  The words of the poem are printed on the back of the book.  I memorized the poem but I wanted to have the words as a cheat sheet.

Over the years, I’ve become comfortable enough with my memory of the story to try it with helpers.  I choose an adult male to play Dead Eye and a boy to play Fred.  I instruct the audience to be the Caring Majority.  When I give them a signal they are to make quacking and clucking sounds.  I ask one more person in the audience to play the part of a cheerleader.  When I signal the cheerleader, he or she is to stand up and say, “Our hero!”  Dead Eye is given an eye patch and duck nose to wear.  Fred is given a duck nose to wear.

The Dead Eye character is chosen before the program so I can explain that I will be shooting him with water on his shirt.  I want to make sure he is a good sport and okay with getting a little wet.  I hold a small flip-top squeeze bottle with water in my hand during the story, so I can easily flip up the top with my thumb and squirt him at the correct time.

Dead Eye Duck Story and Presentation Notes
It’s time for the story of Dead Eye Duck.  The entire audience will play the part of the caring majority of ducks.  You’re a noisy majority of ducks.  When I give you this signal with my hand, I need you to quack and cluck like a bunch of scared ducks.  Let’s practice.  (Give the audience a signal.)  Excellent.  I heard more fear on this side of the room.

I’ll also need a couple duck actors.  (Music for finding helpers.)  You’ll play the part of Dead Eye Duck.  You’re one mean duck.  When I tap you on the shoulder, please say, “I’m mean!”  (Give helper duck nose and eye patch to wear.)

You’ll play the part of Fred the Featherless.  Dead Eye has stolen your feathers and you’re very cold.  When I tap you on the shoulder, please say, “I’m chilly!”  You only get one shot at this in the story so give it your all.  Let’s practice.  (Give helper duck nose to wear.)

I’ll need one more helper who will remain in the audience.  You’ll be our cheerleader.  Whenever I point to you, I want you to stand to your feet and say, “Our hero!”
(Perform Story)

Final lines after performance
Let’s give our helpers a big hand.  (Send helpers to seats.)  The caring majority is you.  That means you shouldn’t be scared when someone is picking on you.  You should tell an adult and remember the majority of people are kind, caring, and supportive of you. 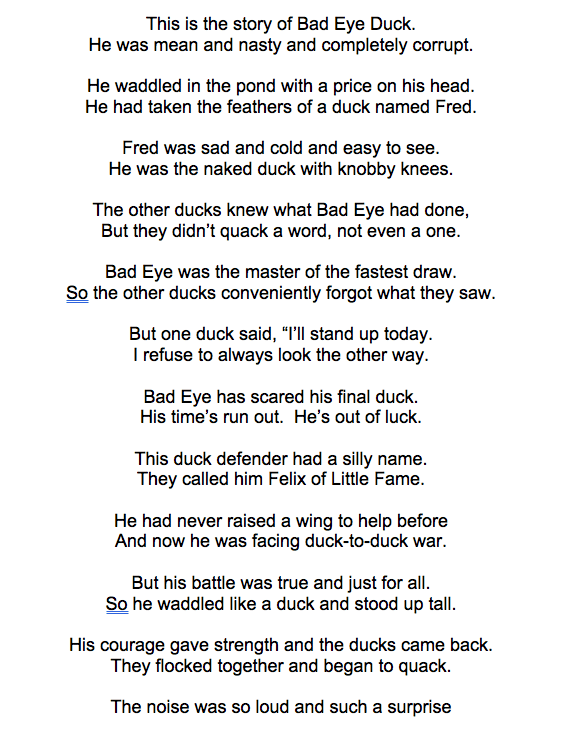 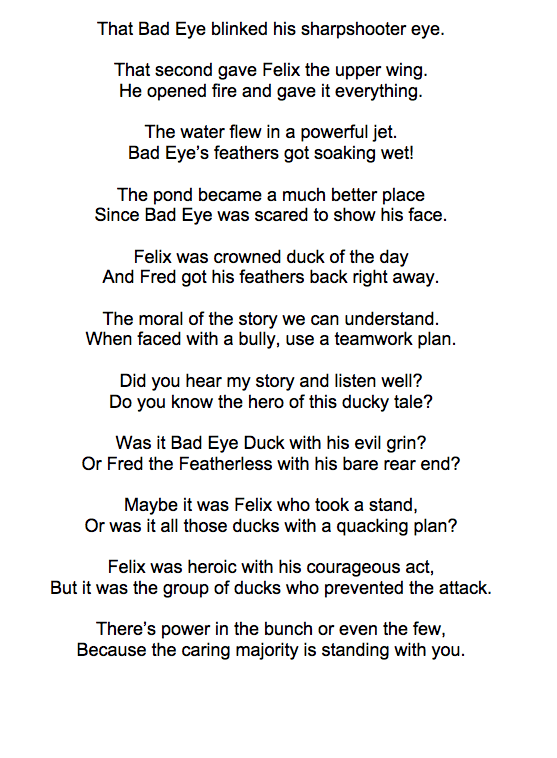 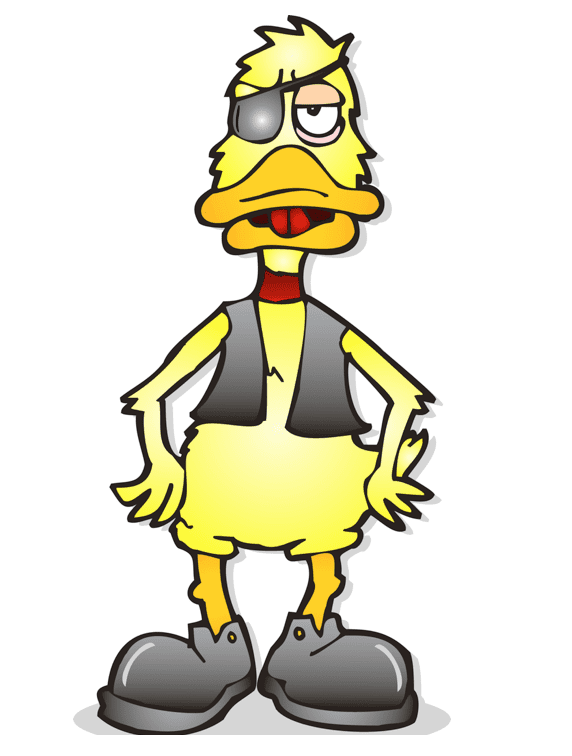 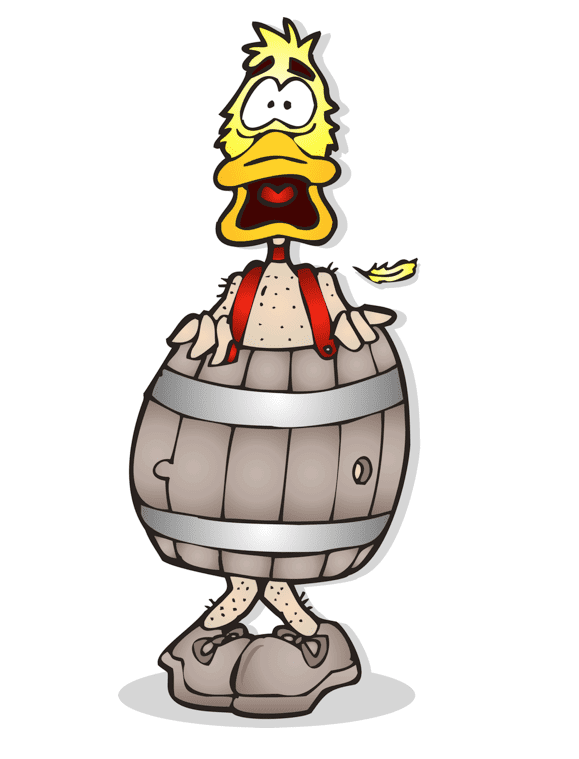 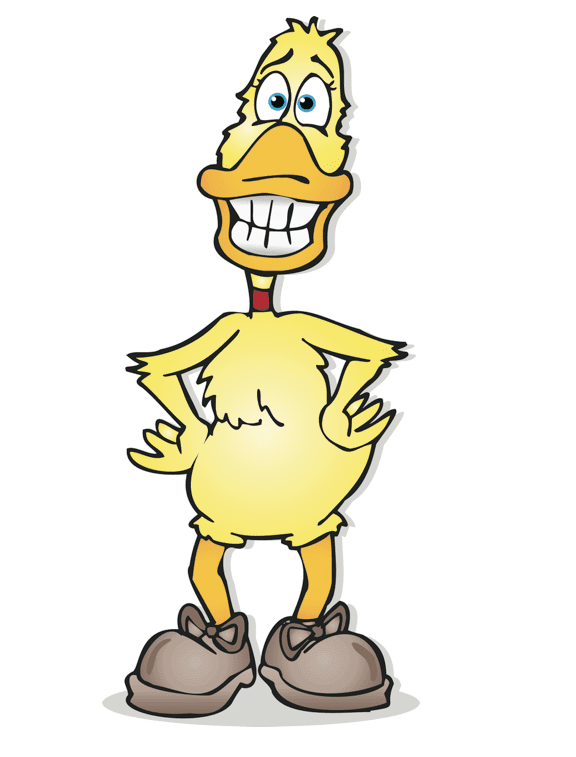 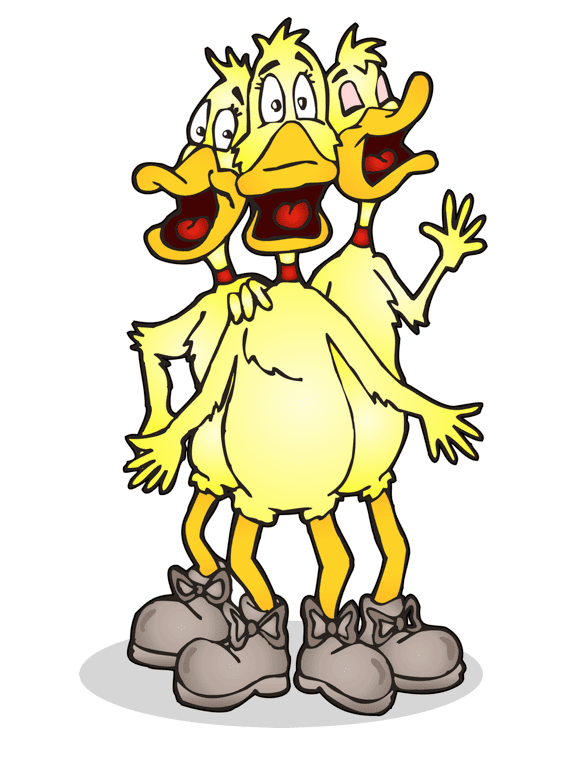 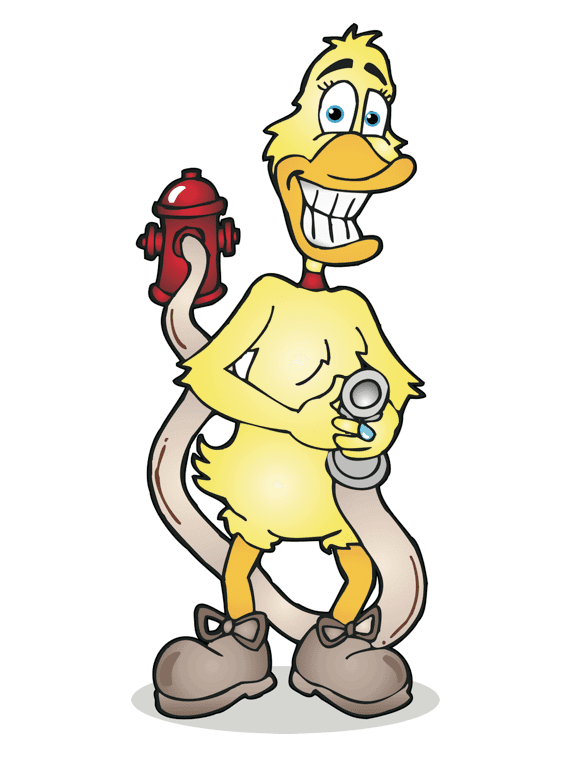