Fire Up – Felix the Fibbing Frog

Felix the Fibbing Frog
This story was originally published in The Magic of Thinking Creatively in 2003. I also used it in my Storyteller Vol 1 DVD.

Props
The idea for this story was sparked by a short devotional I read in college about turkey feathers.  A fun prop for your helper to wear is a Viking helmet or unicorn horn for a fantasy theme.  You will also need three nesting measuring cups with handles, a magician’s change bag, a paper bag, a king’s crown and feathers. A feather boa is a great option to avoid having a mess with single feathers.

Felix thinks he’s one funny frog. He loves to sit around and tell stories at the Lily Pad.  The Lily Pad is the local watering hole.  He especially loves to tell stories about other frogs that are not true! In other words – lies!

Sometimes his stories hurt the feelings of the other frogs and they hop over to ask him why he tells such stories.  Felix simply acts surprised and says, “You’ve got to be kidding, I wouldn’t say something mean about you.”  Then Felix will point to another frog in the Lily Pad and say, “He-did-it, he-did-it, he-did-it.” (Pronounce line to sound similar to rib-et.)

Day after day, Felix continued to tell fibs about the other frogs.  Almost every day some frog would question him about his stories and Felix would place the blame on someone else saying, “He-did-it, he-did-it, he-did-it.”

Then one morning, Felix woke up with a strange looking wart on the end of his nose.  (Give smallest measuring cup to helper and ask him to hold it in front of his nose.)  Of course, most frogs, have warts but this wart was really big and really nasty!

Felix went to the Lily Pad as he did each day, and the other frogs started to laugh at his big nasty wart.  They started to call Felix names like Nosey, Wart Ranger, and even Rudolf.  Felix was hurt by their names and teasing. He made up more stories to explain why he had the overgrown wart.  But no one believed Felix’s fibs.  He had been telling stories for so long that everyone just laughed at him.

Each day Felix would wake up only to find his wart had grown bigger.  (Exchange measuring cup with helper for the next larger size.) It grew so large that he asked other frogs what he should do.  Felicia Frog suggested makeup.  She said, “Makeup can hide a world of sin.”  Felix gave it a try, but the other frogs just laughed even more.

Freddy Frog suggested if all else fails, simply cover it up.  (Show a paper bag with a drawing of a face on the front of the bag.  Don’t forget the eyeholes for effect.)  But the other frogs still laughed at Felix.

In a short time, Felix’s wart had grown almost as big as his head. (Exchange measuring cup with helper for the largest size.) He had to do something.  He decided to visit Buford the Bullfrog.  Buford was the Prince of all frogs.  (This is an opportunity for the storyteller to wear a king’s crown.)

Buford listened to Felix’s plight and saw his wart. Even the Prince had never seen a wart that big and nasty.  The Prince had heard about Felix and all his fibs. Buford offered a solution.  Felix should collect feathers from the rare gossip goose.  (Hold up feathers in change bag.) After collecting the feathers, he was to place one feather at the front door of each frog that was hurt by one of his fibs.

Felix was desperate and agreed to give it a try. Felix placed over one hundred feathers on the doorsteps of frogs all around the pond.  (Show handful of feathers in change bag.) He then returned to the Prince for more instructions.  The Prince said, “Now that you’ve placed the feathers, go back and collect each one and bring them back to me.”   Felix was surprised but he did as the Prince requested.

After three days of searching Felix returned to the Prince and said, “I looked for the feathers I placed on the doorsteps and I couldn’t find a single feather. (Show change bag empty.)The wind must have carried them all away.”  The Prince said, “You are correct.  Each feather was carried away and you’ll never be able to get them back. In the same way, the lies and mean words you said about others can never be taken back.  The best you can do now is ask for the forgiveness of your neighbor frogs.  You need to learn to use your tongue to share good words about others and to catch flies.”

Felix understood his lesson and promised to watch his tongue from then on.  He had only one question, “What do I do about the giant wart?”  The Prince said, “That’s simple, wart remover, you can find it at any drug store.”

And that’s the story of Felix the Fibbing Frog who became known as Felix the Friendly Frog, all because he learned to control his tongue. 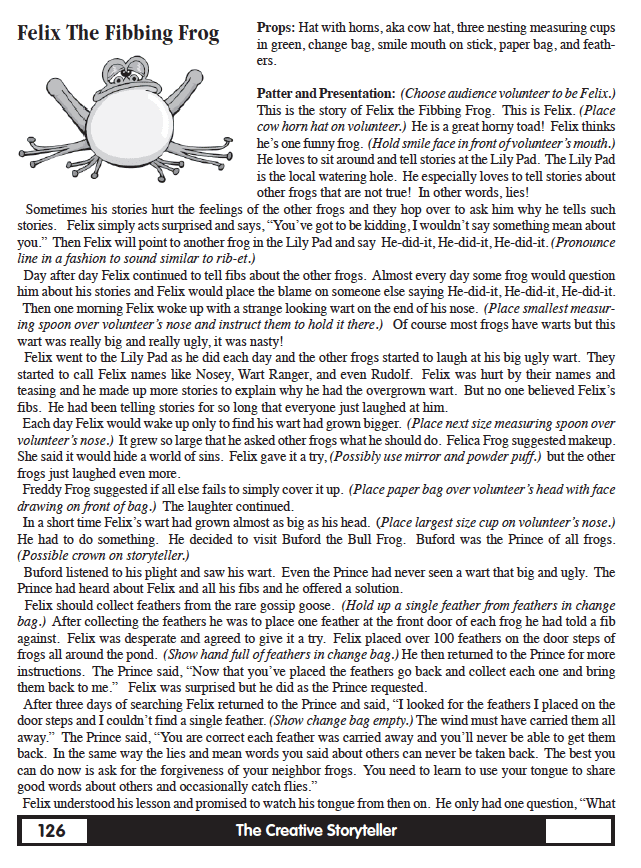 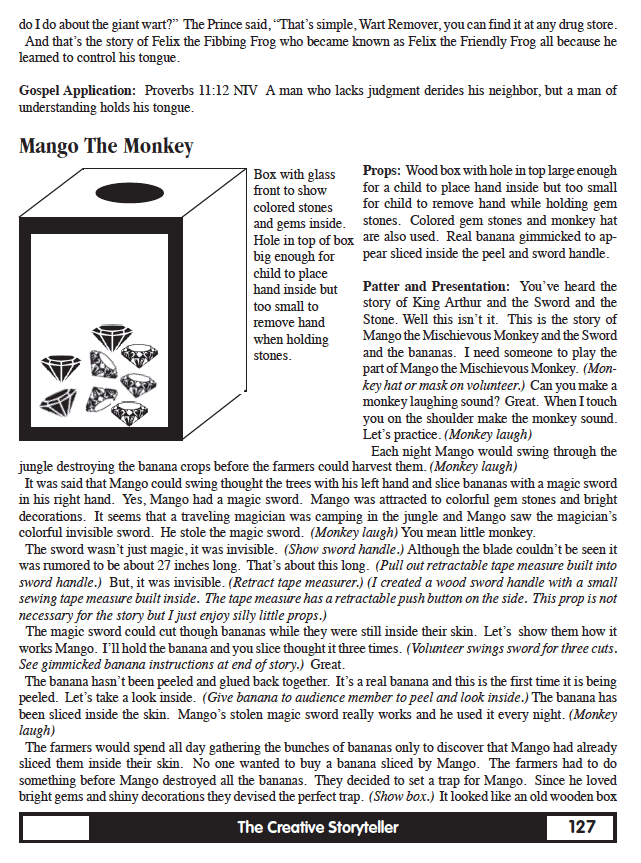