Way back in 2006 I still had a little hair. This was one of my summer Vacation Bible School shows. At this time, I was writing a summer show based on the Baptist Book Store (Lifeway) VBS theme. Originally, I marketed the summer show to schools the following school year with an educational theme. As I look back now at these older shows, I’m both shocked and pleased. Shocked at how silly and simple some of the content is and pleased that the audiences seemed to enjoy the shows despite my immaturity. Also very pleased that my show has improved.

Here’s a breakdown of the routines in the show with my notes.
HAPPY SONG
I’ve used my version of the Happy Song to open shows for a long time. In this early version, the second verse has three different motions. At some point in the future, I discovered there should be only one motion and it should also have a sound. Logically, I should have realized that since the verses in the song, as written, have matching sounds and motions. But it took me a few years to catch on. You’ll notice there’s very little audience participation during the second verse because I give them nothing to say and the motion changes, creating confusion. HOW could I not see that?

BLENDO BAG
Not sure where my head was with this one. I had this really cool blendo bag that Tim Sonefelt made for me and I guess I just needed to find a way to use it. Not my finest opening for sure.

HELPER RULES
My helper rules have changed some over the years. I now call it the Character Opening. The requested actions are now focused on revealing character as well as the accepted behavior.

FROZEN FUN TUBE – STIFF ROPE – AQUA CHANGE VASE – WATER SUSPENSION – SLUSH POWDER
Some of the logic in this presentation is pretty good. I love the idea of pulling a stiff rope through the tube to freeze it. Using the Water Suspension effect with slush powder was also a fun concept.

MOOSE HEAD ON A STICK
I love the silliness of this routine, however, now that I use puppets in my shows without a sound track, I see the real power of puppets. At the time, I was SO PROUD of this. However, I was proud because I made it, NOT because it was a good presentation. It’s VERY EASY to miss the point of a show when we focus too much on the props. I made this from a Christmas toy. It was originally a reindeer singing, “Grandma Got Run Over By A Reindeer.” I removed some of the parts and changed the eyes. The speaker wire was cut so there was no sound. The on and off switch is on the back of the pole so I can tap it with my thumb. This is a horrible example of puppets in a show. However, it’s a wonderful example of someone so excited about his new toy that he forgets the important part is the audience’s entertainment.

AFFIRMATION
I used affirmations in all my shows at this time. Today I might call it a Running Response. My goal was for this affirmation to be the educational point of the shows. Throughout the show, there are tidbits of content/message of the show.

VACUUM MAN
This is one of the most fun routines in the show. I sold quite a few of these. To see the routine again and how it was made CLICK HERE

SNOW TRAY – AQUA CHANGE VASE – SNOW POWDER – SPONGE BALLS – INCREDI-BALL
I used to sell the black tray as an effect called Frozen Fun. The tray is plastic with an angled bottom. The angle allows for 4 sponge balls to be hidden in the back. The process of holding the tray automatically loads a ball in your hand. Just reach into the snow powder and pull out a white sponge ball. The Aqua Change Vase is used to switch water for the snow powder. The Aqua Change Vase is also the prop used for the Mother of All Diamonds effect. To see it CLICK HERE 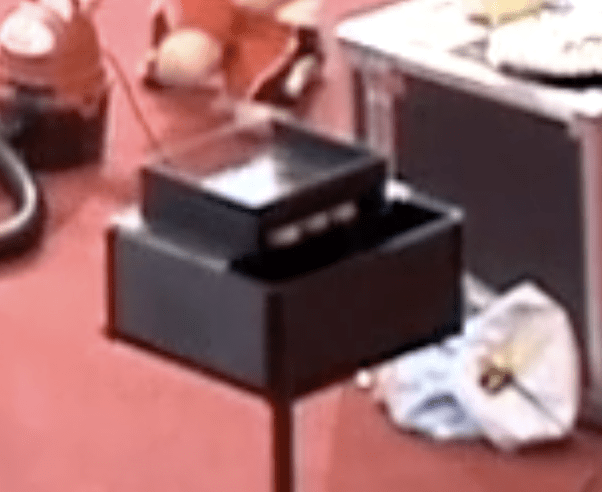 A back stage shot of the video shows the 4 balls hidden in the tray of Frozen Fun. Obviously, no one told me the video would show the secrets from behind. Duh!

The red ball on the cone is a red incredi-ball. I steal it as I dump the second bottle of Noogie Cream. After all, no one like Noogie Cream.

CONE-O-CHOICE
This game was a variation of my Ranch Hand Roundup game in my Word Wrangler show. It’s a fun way to cover some of the content in a show with a little bit of magic. In this case, the only magic is making sure one of the kids gets a cone with a red dot.
DO NOT OPEN IT INSIDE THE CHURCH! DO NOT OPEN IT INSIDE MOM’S CAR! . . . but it’s okay to open it inside Dad’s truck. I LOVE that line.

ANGRY GIANT
I love storytelling with audience helpers. Especially if the audience gets to say something stupid like “help me, help me.” Would have been really nice if the load of the shoes wasn’t fully visible from the back camera angle. The trick with the shoes is actually pretty silly. But the story was fun.
See the Angry Giant details CLICK HERE 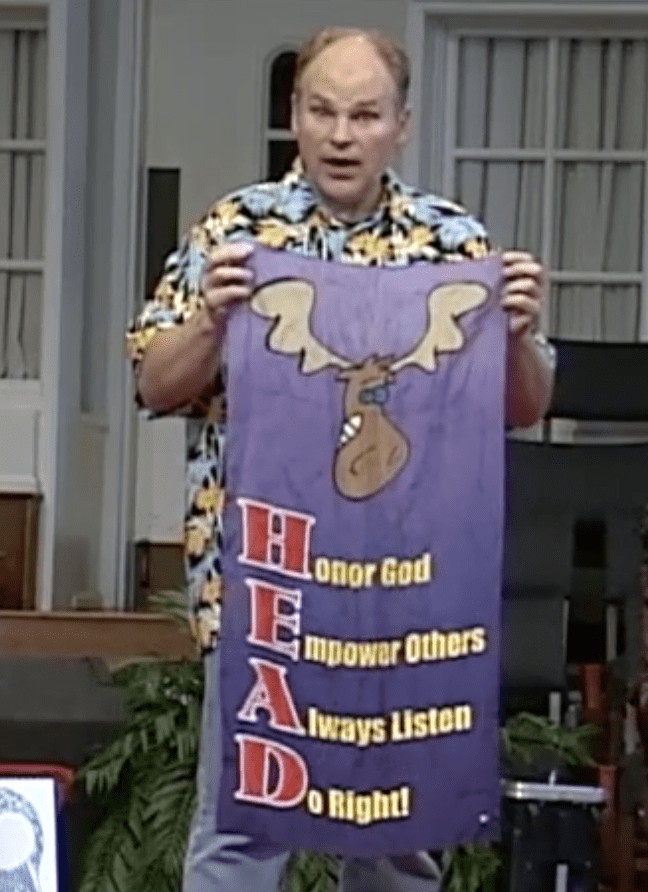 Moose on a Stick Close Up