Guest Session – At the Kitchen Table with Karrell – Mark Tripp

A BIG Thank You to Mark for allowing us to see the full DVD content. 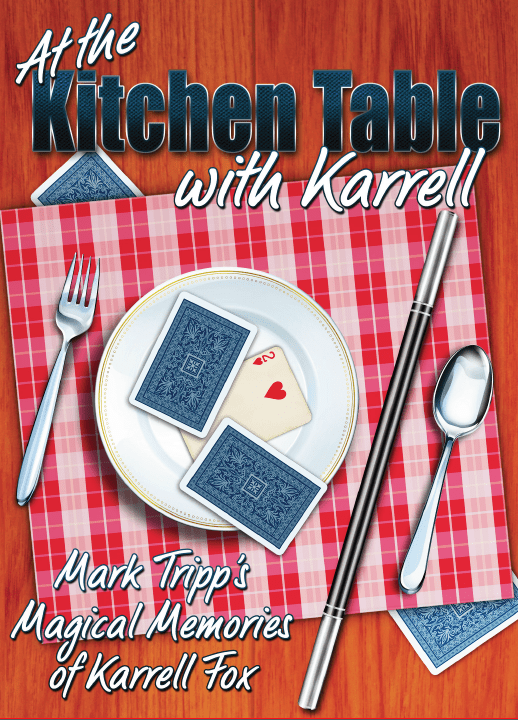 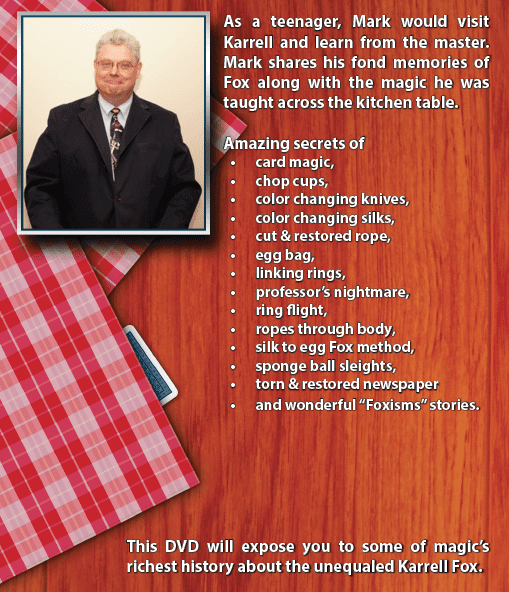 At the Kitchen Table with Karrell
Mark Tripp’s Magical Memories of Karrell Fox
As a teenager, Mark would visit Karrell and learn from the master.  Mark shares his fond memories of Fox along with the magic he was taught across the kitchen table.  Amazing secrets of card magic, chop cups, color changing knives, color changing silks, cut & restored rope, egg bag, linking rings, professor’s nightmare, ring flight, ropes through body, silk to egg Fox method, sponge ball sleights, torn & restored newspaper and wonderful “Foxisms” stories.  This DVD will expose you to some of magic’s richest history about the unequaled Karrell Fox.

Mark Tripp
Mark Tripp’s love of magic began as a small boy sitting in front of his TV set and watching Mark Wilson and the Magic Land of Alakazam.  Growing up in Metro Detroit Mark also watched “Milky’s Party Time” with the late Karrell Fox as Milky the Twin Pines Magic Clown.
Karrell Fox was to have a major influence on Mark.  In fact the very first magic shop Mark would visit was “Fox Fun and Magic” the Detroit Magic shop owned by Karrell and ran by Roy Kissel.  As a budding young magician, Mark also spent his afternoon’s watching “The Magic Shop with Mr. Whoodini” on TV.
At his first Abbott’s Magic Convention Mark met Don Viano and thus began a friendship and a mentoring relationship that would last over 30 years.
After graduating High School he enlisted in the US Army and was trained as a Radio Teletype Operator.  Mark did his magic every chance he had and as he says “I finally did the right card trick for the right General.” Mark was transferred to the US Army’s special services unit and performed magic all over the world.
After his time in the Army was over, Mark returned to Michigan and began working at “The Emporium of Magic” in Southfield Michigan.  He put together a full evening show of magic and illusions called “A Tripp into Fantasy” and began performing for Phone Room promoters all over Michigan, Ohio, and Indiana.
Larry Thompson (aka Mr. Whoodini) contacted Mark about a program for Elementary Schools called “The Amazing World of Light.” Thus began Mark’s career as an educational entertainer.
The Gail and Rice Agency, who was booking Larry’s programs, asked Mark to become their main School Assembly performer and to meet with TV legend Don Herbert, the famous “Mr. Wizard.”  After training, Mark travelled all over the United States performing “Mr. Wizards World of Energy.”
Mark’s association with the Gail and Rice Agency led to many auditions for various large corporations and companies.  Those led to winning roles as “The Marvelous Magical Burger King” and spokesman for a nation wide touring show for Chrysler Corporation and their new Voyager Mini Van.
Mark also performed for Paul Osborne Park Shows for three seasons and went back to work for Larry Thompson and Mobile Ed performing hundreds of educational science shows in schools across America.
Currently Mark is still performing in Schools, Comedy Clubs, Private Parties, and lecturing at Magic Conventions as well as creating instructional DVD’s for his fellow magicians.