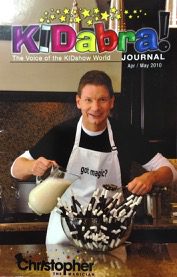 Heart 2 Heart + 1
I searched the lanes of my local dollar store and found a simple item that inspired me.  Your mission, should you choose to accept it, is to write a clever and entertaining routine for this simple idea.  This article will burst into flames in five seconds so start reading.  I realize I’m showing my age with that reference.

Little Heart Boxes
The picture shows a pack of eight heart boxes. These cute little hearts would be great for a close up Valentine’s routine, however, since they are hearts they could be used for any last minute heart surgeon show you book.  Wow, am I hot today or what?  Don’t answer that.

For a Valentine’s show suggest that these hearts will determine if two lovers really know how to choose a perfect match.  The husband can make one of the choices and the wife make the other choice.

Get ready this trick is so simple you’ll think I’m brilliant.  Or maybe just really old in the magic game.  Choose three playing cards you can easily remember.  For explanation we’ll say one, two, and three, an ace of hearts, two of hearts, and three of hearts.  Place these cards on top of the pack.  Place three duplicate cards inside the heart boxes remembering which card is in which box.  For example, line them up from left to right, ace, two, three.

The spectator may choose any pile.  Turn over the top cards of the two other piles.  Since you know the cards are ace, two, three, you will know the hidden card by process of elimination.  Since you also know the order of the cards in the heart boxes you may force the correct box using the magician’s choice.

Magician’s choice is a deceptive method that fools just about everyone except people who know the trick and double-naut (00) spies.  Showing my age again.  For explanation assume the one boxes that needs to be forced is in the middle.  Ask the spectator to pick up two boxes.  If you get lucky and they pick up the outside boxes the force is done.  If they pick up an outside box in the right hand and the middle box in the left hand ask them to place one box on the table.  If they place the outside box on the table say, “Is there any reason you chose to keep that one box in your hand?  Please open the box and show us what is inside.”  If they place the middle force box on the table say, “Is there any reason you chose to put that box on the table?”  Then follow up by showing the card inside the chosen box and the card on top of the chosen pack.

That’s it, simple and to the point.  Hope you like it and can use it.  I first learned this principle of the three card force from a Steve Dusheck video.  In his version he had the three cards hidden different locations of his wallet and asked the spectator to place his wallet on one pack.

Now it’s your turn.  Please email me your ideas.  I would love to share your creativity to others in this article.  Naturally I will say it’s my own idea and not give you credit but still you’ll know the truth.  I’m just kidding, you’ll get full credit.  I look forward to hearing from you.