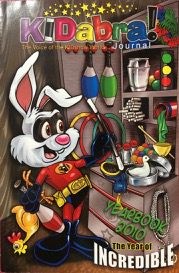 TOP SECRET
Barry Mitchell’s Show Formula
Hey there Kidabra members.  I thought the yearbook would be a great place to share my formula for a great show.  I’ve promoted these ideas in many of my lectures over the years.  I figured if I go ahead and share them in print I can knock twelve minutes off my lectures and we can all go home early.

This is not a formula for ALL shows but it is the line up I use for children’s and educational shows.  I have made a few subtle changes over the years but the basic formula is still the same.  I don’t follow this outline for my adult audiences where I’ll be doing a motivational speech.  In a speaking situation it’s not necessary for me to open with a flashy magic trick.  I replace that with a longer warm up section.

OPEN BIG
Illusionists open a show with a rapid fire of “bubble gum for the eyes.”  They use one or more strong illusions to let the audience know they will be blown away.  Since I’m not an illusionist and haven’t looked good in spandex since college, I look for something that grabs attention quickly and plays as big as possible.  For some this might be a silk routine set to music with a large final production.  You might use a production box ending with the appearance of a Toyota Prius.  “Green” is hot now.  Since I’m not a silk guy or a tree hugger I strive for something like my CAN Opener effect.  It is simple, yet big in size and energy.  And most importantly children’s audiences love it.

The goal of the big opening is to “quickly establish the beginning of a great show.”

WARM UP
This is my hello and personality opener.  For years I used the “What’s Next,” also called “Dot’s Next” spot card effect as my warm up.  I love it.  Legend says, which means, no one really knows, David Copperfield whooped one out to fill time when an illusion broke in a show.  Okay, he probably didn’t “whoop” it out but you get the idea.  I also use silk switch effects with palmos, dye tubes, and thumb tips.  Presently my favorites are my “Hand & Eye” silks.  However, any color changing silk effect is a great warm up.  Billy McCombs “Half Dyed” is another great example.  Some of Pavel’s rope effects might fit nice here.  www.pavelmagic.com.  Tim Sonefelt’s new “You Turn” effect plays great as a warm up.  www.wonderimagery.com

The goal is to “establish your personality with a small and memorable effect.”

LITTLE OLD LADY DISCLAIMER
The majority of my shows at this stage in my life are children’s church events.  If you don’t do churches you won’t need this piece of the formula and you can move ahead.

Ah, you stuck around just because of the title didn’t you?  At church events I follow my warm up with a few brief lines explaining that all my magic is just for fun and there are no special powers, witchcraft, or Harry Potter.  I use the Harry Potter name because it gets a laugh.  I also use it because some people are really nervous about children being influenced toward witchcraft due to the characters.  That’s not my concern during a show.  My only concern is to set at ease the mind of the “little old lady” in the back of the room that does feel that way.

The goal is to “not alienate a portion of the audience before the fun has begun.”

AUDIENCE INVOLVEMENT
I use as many people on stage as possible in my shows so I start early.  I’ve found that my audiences really love my style of storytelling using volunteers that are given lines or actions.  If storytelling magic isn’t your thing just insert an audience involvement piece here.

My absolute favorite story to perform is my “Magic Box.”  It’s a very simple light and heavy box using the light and heavy glass method.  I use four helpers on stage and it’s FUNNY.  There’s very little magic but six great minutes of entertainment.  The goal in my shows is very simple, entertain them first, blowing their minds with magic is just a bonus.  See for yourself on my youtube site.  You can see the CAN Opener, Hand & Eye, and the Magic Box videos that were all taken from a live show.  www.youtube.com/barrym2008

I have other story pieces that accomplish the same goal of bringing people on stage and helping them shine.  Tim Sonefelt uses this same method in his stories as well as Jim Austin.  I’ve seen other performers do this too but they are two of the best.  At this point in the show I have helped them laugh, helped them like me, and gave them a desire to want more.

The goal of audience involvement is to “establish a rapport with the audience.”

SKILL TRICK
Audience’s love to laugh, participate, and be blown away.  But a great show must include a skill trick and a heart tug.  My best skill trick is the cut and restored rope.  My second best is, okay I don’t have a second best.  When the rope trick doesn’t fit the theme of my show I insert a puppet.  I guess I think talking with my hand is a skill.  It’s been working for me for years in children’s shows.  Skill tricks are necessary when adults are present.  They are there to prove to the teachers you are worth their time and they should STOP grading papers during the show.  I’m not a vent so I use a taped script or the puppet forces me to move my lips so he won’t be the only one looking stupid.

If you can present rope sleight of hand or stage card or silk work then put it here.  There are a large variety of puppets available and the best come from Axtell.  www.axtell.com  I added the Axtell turtle to my 2010 summer shows.  If I’m doing a skill trick and a puppet I do the puppet first.

The goal is to “give the adults something to compliment you about after the show.”

MORE AUDIENCE INVOLVEMENT
At this point I’ve done everything necessary to entertain and reveal my skill and winning charm.  If you don’t have winning charm I suggest a visit to your local magic shop.  Most shops have it available on one of the dusty top shelves.  The cost may require you to give up some of your ego.  (Come on, that’s funny.)

The goal is to “keep the fun moving.”

HEART TUG
This part of my formula will require some explanation based on different audiences.  For schools the heart tug moments may be built into the morals of the stories.  Since educational benefit is so important in schools they are the one place where educational significance can replace the heart tug.  The moral moments, in many ways, are more for the teachers than the students.

For family audiences I often use an effect with a motivational story.  One of my favorites is a trick with a peanut and the story of George Washington Carver.  It’s motivational and challenging.  I share several of my motivational stories in my new book, “Let Me Tell You A Story.”  For church shows I use the heart tug to lead into a gospel presentation.  My gospel presentation includes a solo effect to help me illustrate my points.  There are many effects on the market to accomplish this.

Many Kidabra members have attended the annual convention in Pigeon Forge, Tennessee and seen the Terry Evanswood magic show.  I hesitate to say “magic show” because it’s really more of a magical experience.  If you haven’t seen Terry perform it’s worth the trip just to see his show.

Terry is the only illusionist I have ever seen use the heart tug effectively.  Most illusionists spin box after box ending with a big animal finish.  Nothing in their show is memorable other than big boxes and animals.  Even Copperfield can’t present an effective heart tug and he doesn’t even seem to try anymore.  However, Terry understands the power of emotionally touching an audience’s heart.  I could write volumes on this subject but I’ll be brief.  People will not remember what you say, they will not remember what you do, but they will always remember the way you make them feel.

A heart tug can be as complex as an illusion with a strong emotional connection or as simple as sitting on the edge of the stage and sharing a personal story with the audience.  I end most of my magic lectures with a very short story about Abraham Lincoln while holding a jumbo penny.  It VERY simple but it reveals both my heart and my challenge for the group.

The goal of the heart tug is to “establish a deeper friendship and unforgettable emotional connection with the audience.”

FUN FINISH
In the past I would have called this my big finish but I really don’t finish big.  I focus on finishing with something fun.  I sometimes end with an effect that I have hyped throughout the show.  For example if I plan to end with the growing head optical illusion I will ask the kids after each segment of the show if they are ready to see someone’s head grow.  Naturally they will scream, “Yes!”  I simply say, “Not yet.”  By the time the end of the show rolls around they can’t wait to see the growing head.  The growing head is another one of those effects that bring the adults up to you after the show to say, “Wow, that was neat.”

In many of my family night church shows I have back of the room products to sell.  My fun finish is the product pitch using an audience helper and rewarding the child with one of everything.  This is great fun, at least for one kid.  But when I expose one of the secrets to the kids it’s fun for them too.  For motivational speaking programs I also end with a product pitch but it is very brief and preferably after a pause following the heart tug.

The goal is to “finish fun.”