Fire Balls Gone Crazy
Here’s a fun one. One of the ideas for Switch POP was to use a bead as part of the load going into the balloon. The video of the idea is below the script. I really like the magic of the bead in the balloon. It really adds a legitimacy to the process of using the tube to place the items inside. In the video, I refer to the ball as a hot fire ball. Sometime after the video shoot, I had the idea for Mike the Meteorite. It seems to make perfect sense for a space themed show. It is vital to have the balloon and bead inside a container with a lid during the shaking and popping of the balloon. Otherwise the bead becomes a bullet and you don’t know where it will go. The clearer the container the better. When you shake the ball inside the balloon, it will light and flash.

Props
The balls used are light up balls found inside the googly balls and most likely other light up toys. These are the same googly balls I use to make SLOBBER NICKELS. They are painted lightly with latex silver paint. It’s a light coat just to cover the workings inside the ball. If the paint is too thick, it defeats the purpose of the balls flashing inside the balloon. The silks used are 18 inch and the holes are cut bigger than the size of the balls so they show up better. There is no video of this effect but the script should explain the handling well enough.

Script
Would you like to meet a meteorite? He’s here inside this little bag. Oh no, who put him in this bag? This looks like a starter kit for guacamole.  Say hello to my little friend Mike the Meteorite.

Mike is a meteoRITE because he burned through the atmosphere and he’s still . . . a rock. Otherwise he would be a forgotten meteoROID. That’s the end of this vocabulary alert.

Today Mike will show off his skills of passing through the atmosphere. Today the atmosphere will be played by this piece of cloth. Mike will burn holes in the cloth while we watch. To make his great balls of fire effect even more fun, he will do it while inside a balloon. WOW. That inflates it to a whole new level.

I just need an extremely brave helper willing to hold a great ball of fire . . . inside a balloon. (HELPER) 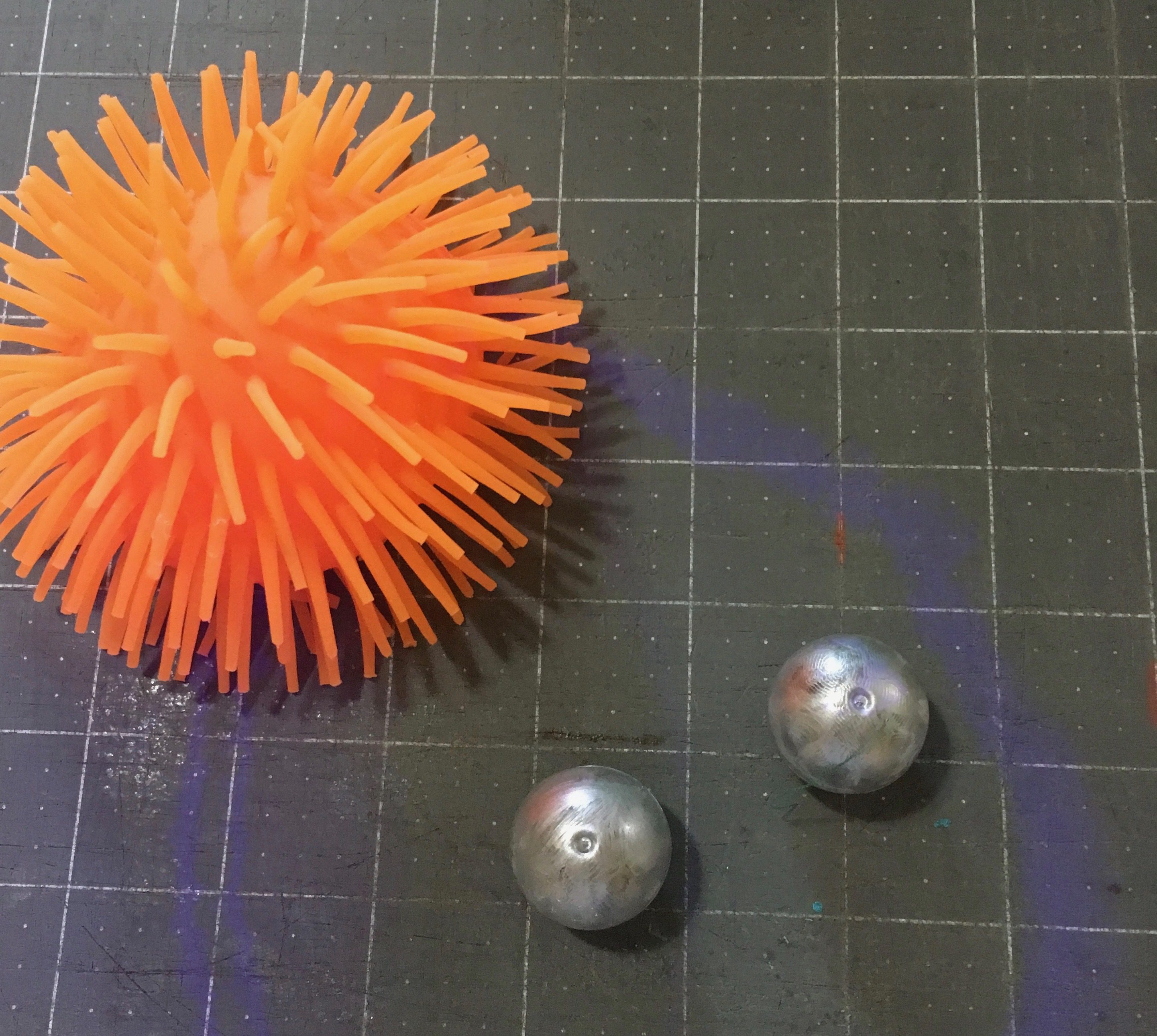 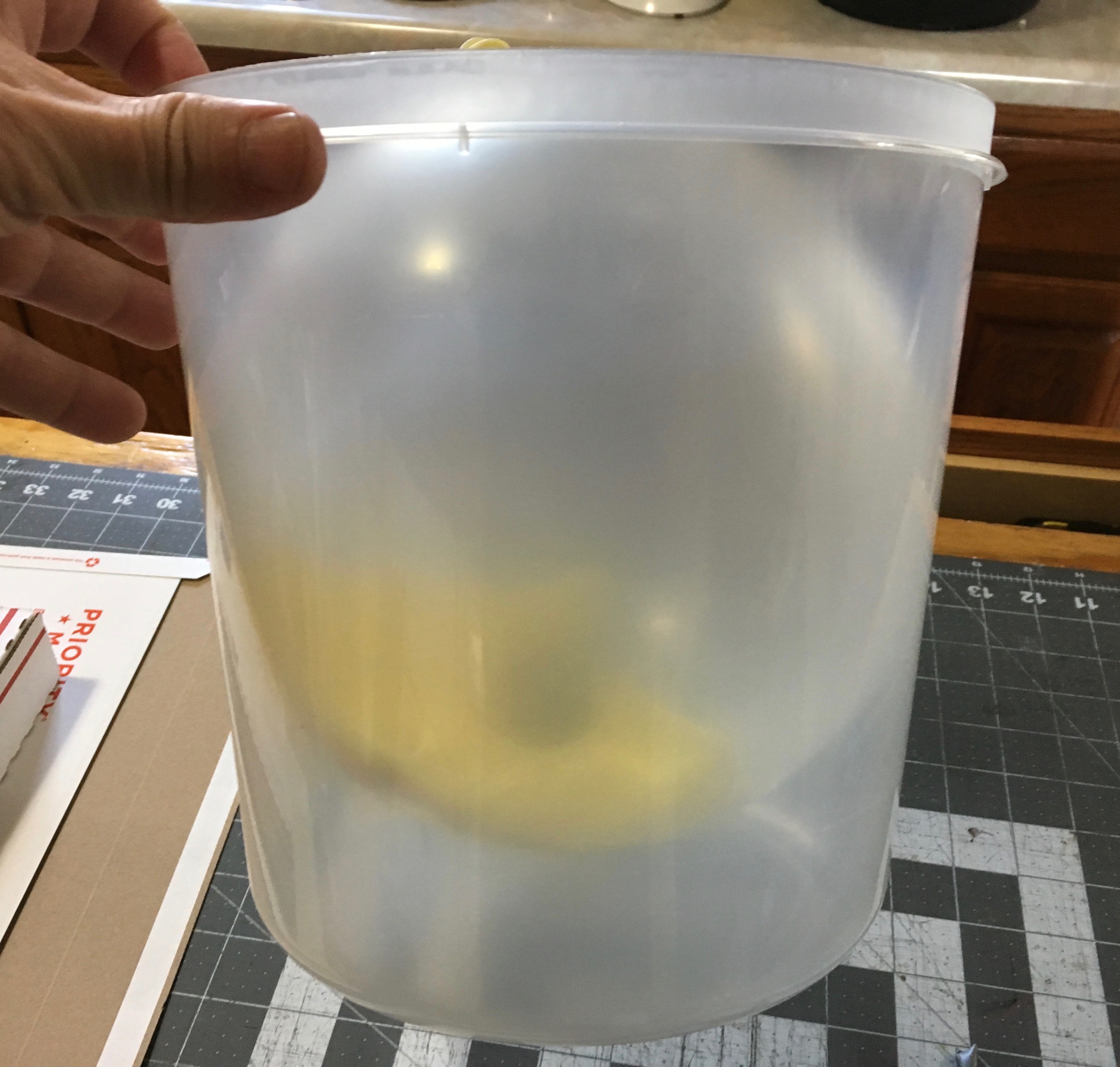 As my helper, I think you should know what you’re getting into. I’m going to place Mike and the piece of cloth inside this balloon. I’ve placed the balloon over the end of a tube so I can push Mike inside. (Switch pop) You can see Mike and the cloth inside. Because this is extremely dangerous, I’m going to place the balloon inside this bucket so you can shake Mike. I’ll be standing WAY over there. When you shake him, he will get “fired” up and burn holes through the cloth. Hopefully you will be safe but I’ll be over there.

(Balloon in bucket for shaking) Mr. Helper, your job is to listen for the music. When you hear the music, start shaking the bucket. Don’t stop until the music stops. Boys and girls watch the bucket to see if Mike gets fired up. (Jerry Lewis Great Balls of Fire)

Goodness gracious there was a whole lot of shaking going on. I think I saw Mike get a little hot in there. Let’s pop the balloon and see what the atmosphere looks like inside. I’ll let you take out the piece of cloth. I don’t want to risk touching Mike. He looks a little hot. (Pop and show silk) Wow, he burned several holes all the way through. Give it up for Mike the meteorite and Mr. Helper.

Fire Ball Explanation
Password is switchpop (One word, all lowercase)