This effect is an example of a creative thinking explosion. 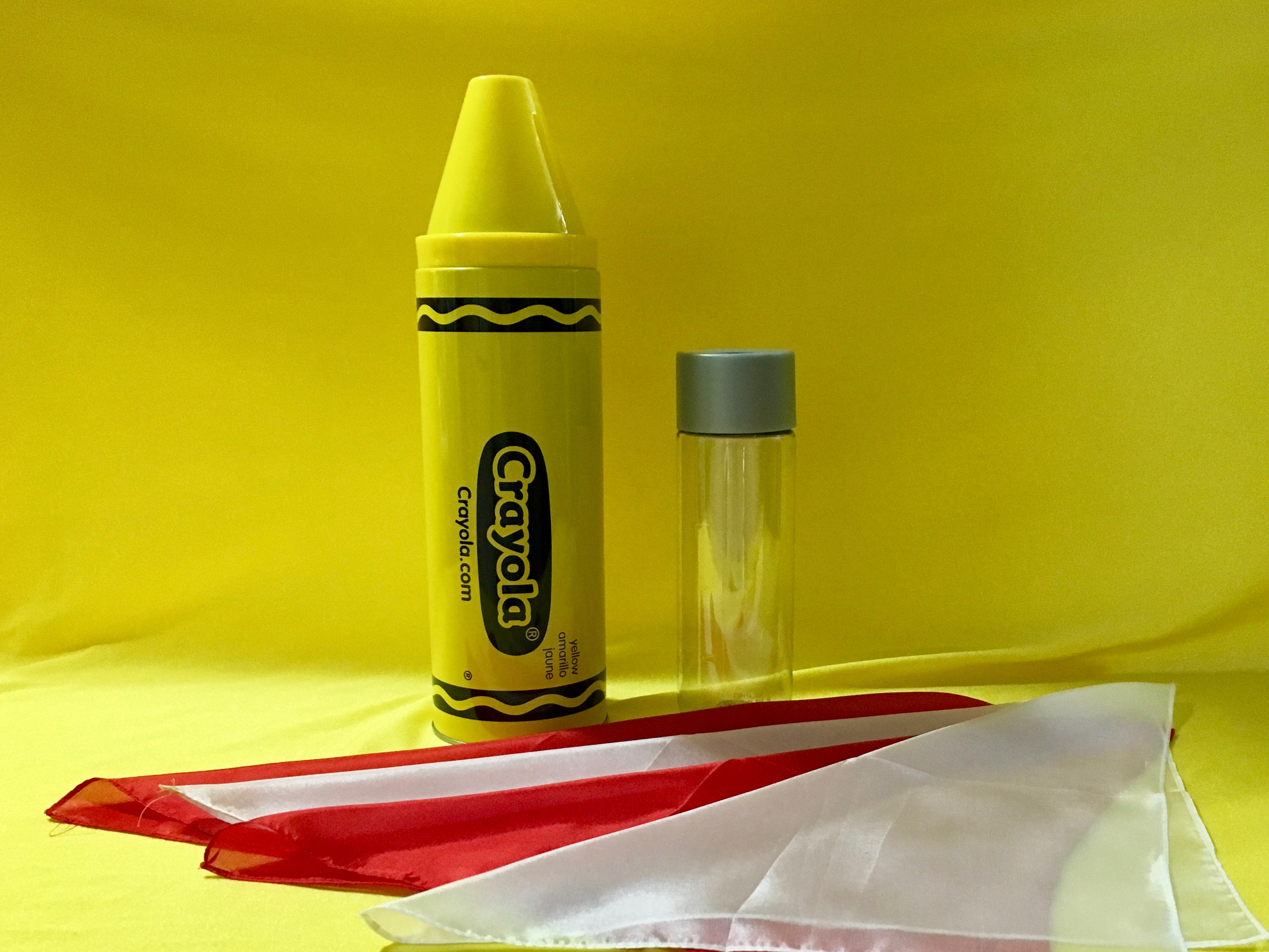 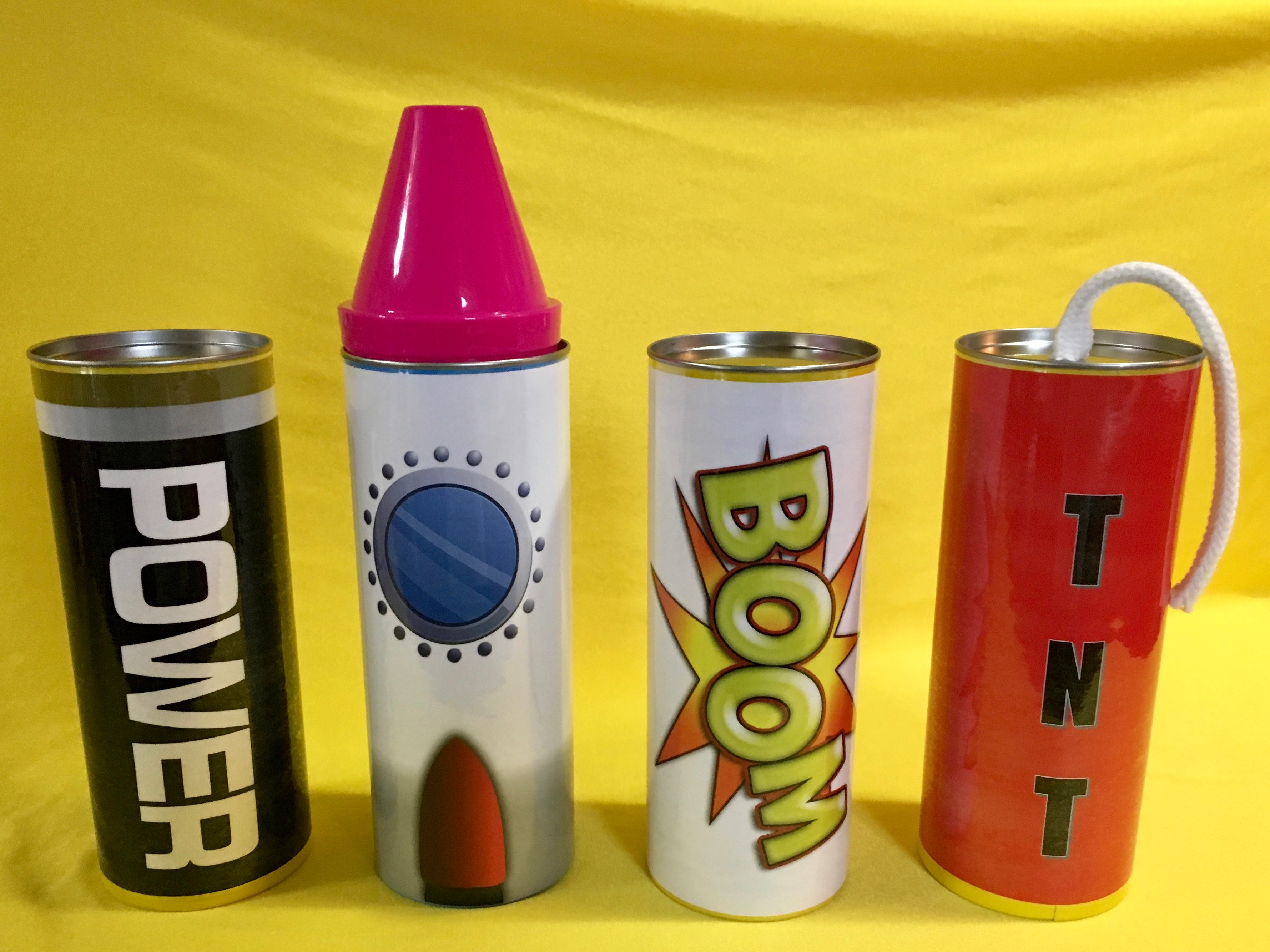 The classic silkola is an amazing transposition. 1. An empty bottle is sealed and covered with a tube. 2. A silk is shown and vanished. 3. The tube is raised and silk is seen inside the sealed bottle. That’s amazing! Crayon-Ola makes silkola customizable and adds new features. The crayon design makes it the perfect companion for children’s shows. However, we also include several PDFs of printable custom art designs. Make your Crayon-Ola into a rocket ship, candy stick, castle tower, Seussical hat, truffula tree, TNT, Boom cannon, lighthouse, trash can and more. You can make your own designs and print on a standard 8.5 x 11 sheet. Due to our one of a kind gimmick design, it is possible to show Crayon-Ola empty before performing. Video instructions explain everything. Comes with metal crayon tube, special gimmick, modern shape bottle, two red silks, two white silks for customization, custom art files download, performance suggestions, protective container and access to online video instructions.

What’s Inside Your Crayon-Ola?
We went on a creative journey to find as many ways as possible to use the principle of the classic silkola. That journey led to an incredibly customizable tube with unique features. The zip file you have opened to discover these instructions contains a wealth of custom art to start your brain engine.

Stay Tuned, We Might Add More
As with all Barry Mitchell Products, we continue to find unique ways to use them. When we discover a new routine, we will add more video footage to the website. The same password will apply. Stay tuned to our Facebook group (Fans & Friends of Barry Mitchell Products) and email newsletters to know when we update the online videos.

Painting Your Own Silks
We highly recommend the silks we offer made by Wonder Imagery (Tim Sonefelt). However, if you want to play with an idea for a design, making your own silks is an inexpensive option. Of course, it won’t be as nice as custom silks, but if the idea works, Tim will be happy to print professional silks for you. Wonderimagery.com

To paint silks, we use Sharpie permanent markers. The art design is taped to a flat piece of cardboard. Silks are ironed flat and the first silk is taped over the art using removable painter’s tape. The second silk will still need to be redrawn. However, the design will be there from the ink that bleeds through the first silk.  Please note, the silks used are standard Magic by Gosh brand. These are thinner than custom silks made by Wonder Imagery. The thinner silk allows for the art to be seen through two silks. When painting is finished, carefully remove the tape and you’re ready to perform. It is recommended to keep the silks dry and avoid leaving them wadded inside a prop. The ink is likely to bleed over on itself in the heat. Pictures below will provide an idea of the process. 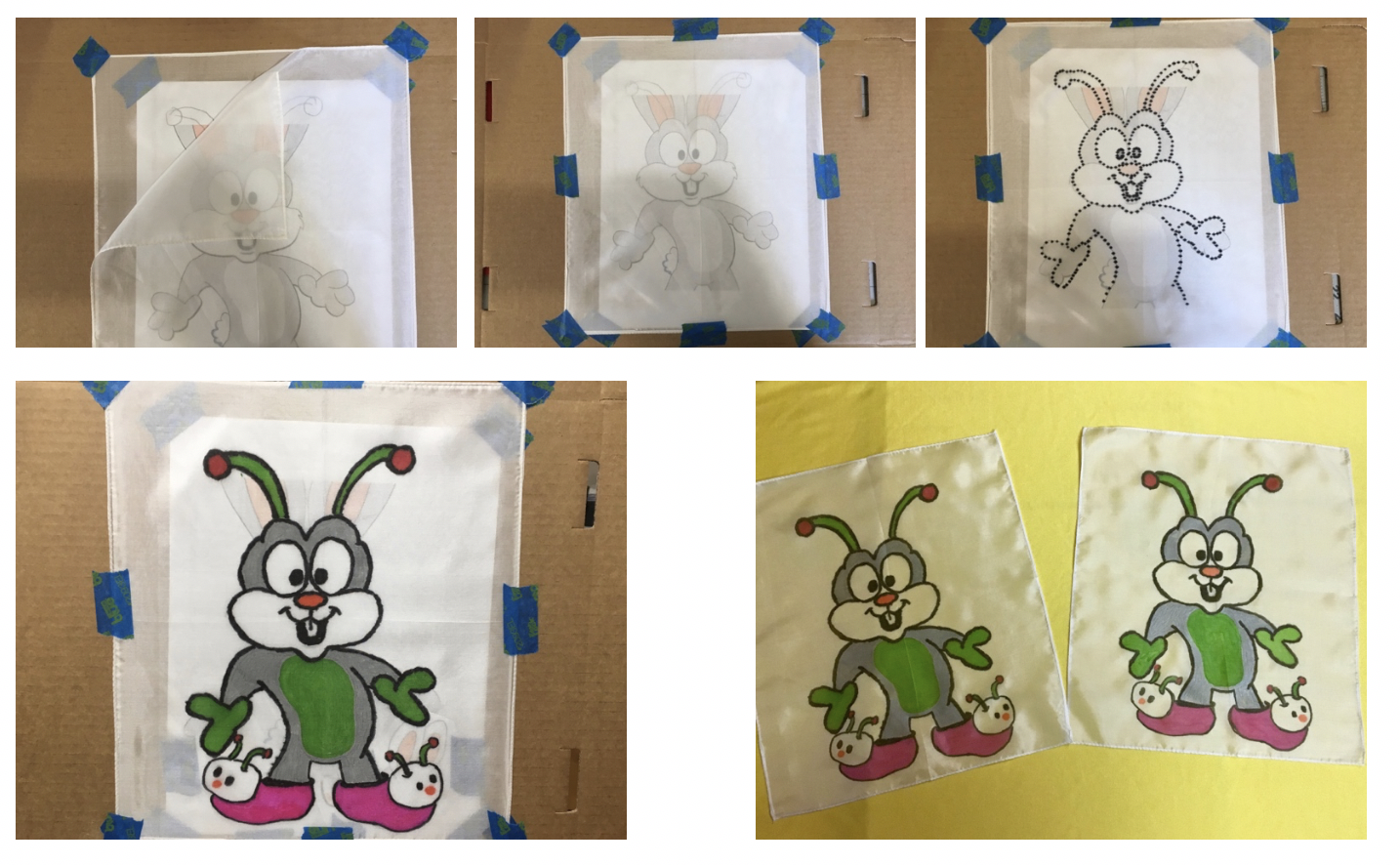 Flingle in My Dringle
I created this routine for my Seuss show. I will most likely have Wonder Imagery print custom silks for this.

The Dringle is empty. I’ll place a lid on it to keep it that way. I’ll place the empty Dringle inside the trunk of a dorce-a-slob tree. Hard to say, impossible to spell. It may look like a Truffula tree. That’s because it is.

The only thing left to do is place the Flingle inside the hollow egg of a slobernickle. A slobernickle is like a chicken, only wetter. That’s nasty. It may look like a pill bottle. That’s because it is. (Pill bottle holds a Vernet king size thumb tip. Thumb tip is stolen away and dumped when reaching for medicine bottle lid.) I’ll cover it with another pill bottle but this one is filled with slobernickel slober. (Slime) That’s nasty.

You’re about to see something in-fling-able. We’re going to put this Flingle inside the Dringle. (Pick up med bottles) This will happen because the slobernickel slober has a confettizing effect on the Flingle, which means he disappears if we spoke Flinglese.  It worked! It appears the slobernickel slober has caused the Flingle to disappear quicker than expected. (Open pill bottle to show empty.) That’s nasty. There’s only one place to check. Could it be that the Flingle is inside the Dringle, which is under the dorce-a-slob tree? Let’s see. Success. We put a Flingle inside a Drinkle. And if Dr. Seuss were to do a magic trick, that’s what he would do.

Flat Matt the Scared-E-Bat
Props
Flat Matt silks were painted the same way the Flingles were made. See directions above. Crayon-Ola is loaded with Matt 2 silk. Bottle with hole lid is on table upside down so hole is hidden from view. Appearing baseballs are in a box with print laminated print of baseball graphic. The art was found online. Gimmicked Cracker Jack box and other props explained below.

Script
Ghosts, goblins and ghouls may scare you. Dogs, doorbells and cucumbers may scare a cat. But everything scares a scared-e-bat. You’ve probably heard of Flat Stanley. This isn’t him. This is Flat Matt the Scared-E-Bat. (Show silk.) He’s a cross between a tree bat and a baseball bat. Either way, he’s a swinger.

You might think he lumbers around due to his heavy wooden bat leg, but he’s actually wicked fast. You’d be fast too if you were scared of everything. It is very rare to even see a scared-e-bat. But I was able to catch him, and I’ll show you how I did it.

Flat Matt the Scared-E-Bat lives in the shadows of the city ball park in the trunk of a bat tree. (Turn around tube to reveal POWER on the side.) I said a battery. (Special thanks to Steve Petra for the battery idea.) In order to catch him, I needed to know where he lived and what scared him more than anything. Once I knew that, it was a snap.

I was able to procure a supersonic suction capsule. (Show bottle) It’s similar to what the ghost busters used but better. It was built by Dyson. They are the masters of suction. I placed the lid on the bottle and hid it inside the bat tree.

Now that I had a place to catch him, I needed to know what scared him more than anything. It just happens to be baseballs. (Show picture of baseballs. Appearing baseballs are palmed in hand.) But he’s not scared of flat baseballs. He’s scared of the real ones. (Produce balls for rolled paper.) You can never predict which way a little leaguer will hit a ball. One miss calculation and bats out!

Would you like to see what I did to scare Flat Matt into the battery? I need a helper. (Give small jewelry bag to helper.) Please place Flat Matt the Scared-E-Bat inside the bag. He’s no longer Flat Matt. He’s now Matt in a sack. We’ll place the sack inside his favorite treat, Cracker Jacks. (Place bag in box. Flip gimmicked box so the preloaded bag is up.) Don’t worry, I already ate all the Cracker Jacks. It’s just an empty box.

I’ll hold the box and you get to do the scary part. You get to say the words that will send Matt in a sack back to his battery. I’ll whisper them to you then you scream them out loud. (Whisper “play ball.”) Wow, that was loud. Let’s check the Cracker Jack box. (Open box and allow helper to remove and open bag.) Is Matt inside? No. What is it? Oh, I know what that is. That’s proof that Flat Matt was really scared. That’s bat poop! (Show candy milk duds or whatever you determine to be the best choice.)

If he’s not here, I wonder if he’s inside the battery. Let’s check. (Lift tube to reveal silk inside. Set tube aside and remove bottle lid. Remove silk and open allowing small band to fall off.) It’s Flat Matt the Scared-E-Bat. And that’s how I caught him. That’s a fact.

Cracker Jack Switch Box
This is, what I consider to be, a clever device to vanish a silk. It did take a little time to carefully build it. I’m using two Cracker Jack boxes and one Milk Duds box. The Milk Duds box fits perfectly inside the Cracker Jacks box. These discoveries are made by standing in the store and looking like an idiot as you compare box sizes. However, the result is a pretty cool toy. I’m also using double stick tape, the good stuff, and clear Velcro dots. Clear Velcro dots are more expensive than regular. I just happened to have them. I also added magnets between the two sections of the Milk Duds box. The magnets are not used for this presentation. However, I wanted them in the gimmick, in case I have a need for them in a future effect. The pictures should be self-explanatory of how the box is made. 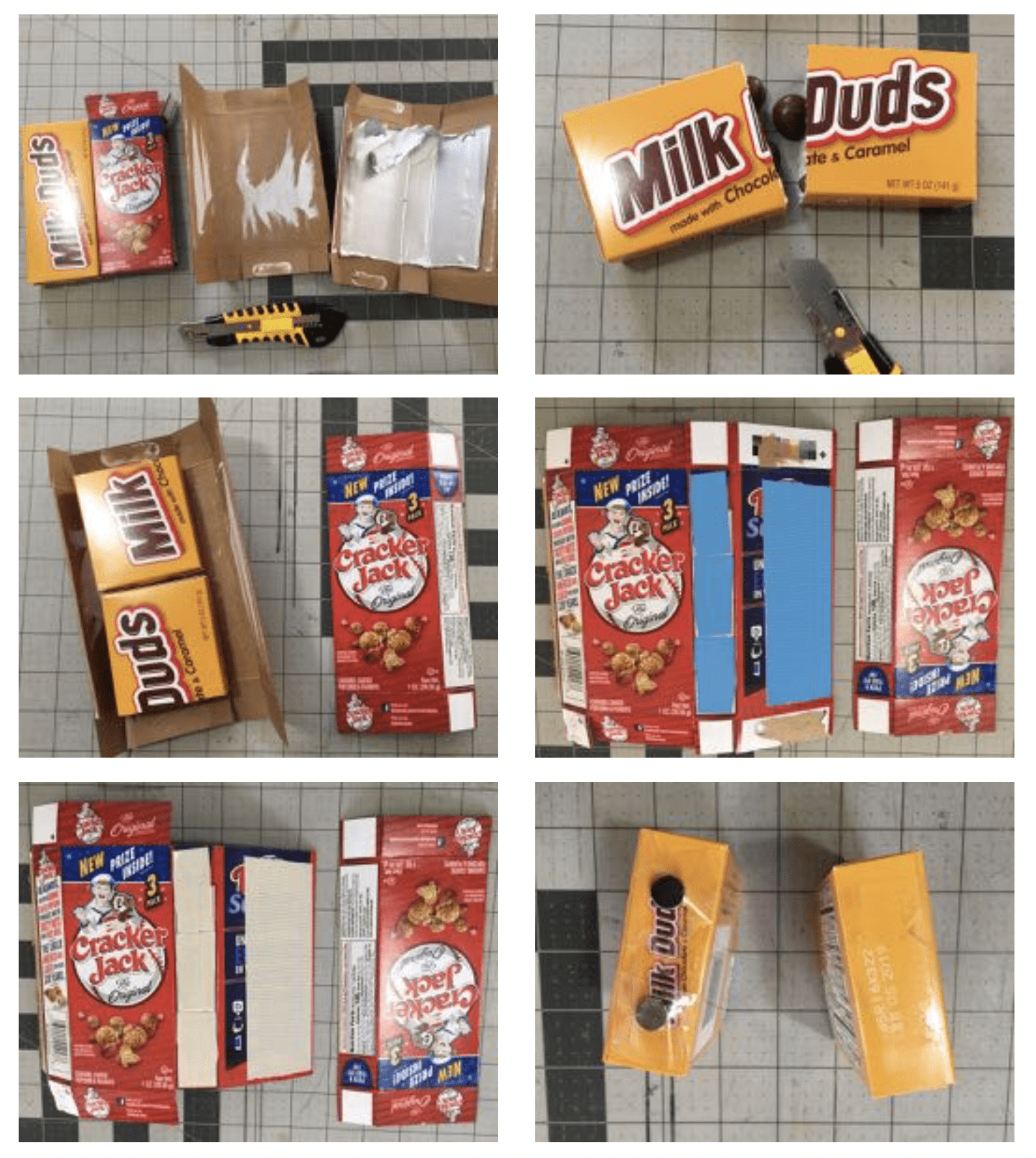 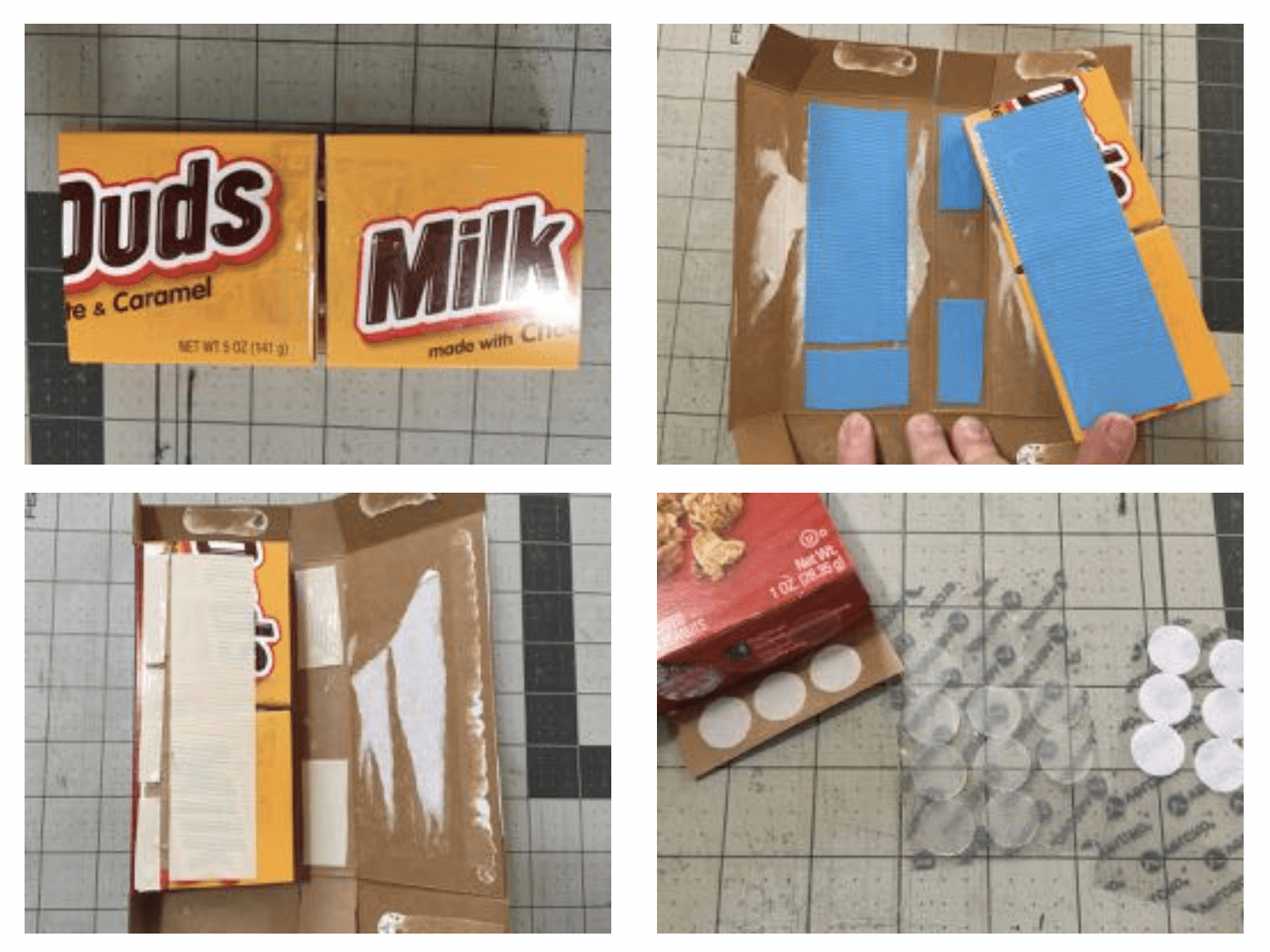